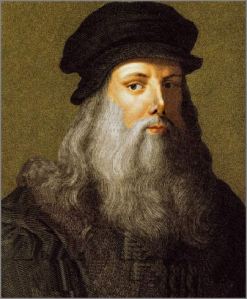 All is not Da Vinci that appears to be Da Vinci; scroll to the end of the text for full disclosure.

I’ve been reading a bit about the genius that was Leonardo Da Vinci these past weeks; his life, his innovations and his pure brilliance. I will admit this might have something to do with me playing AC a bit over the past few weeks, but I find it fascinating to think what someone with a mind like his would be able to create, were that person alive today. Still, even though we’re closing in on half a millennia since Leonardo died at Clos Lucé, so much of what he thought and taught is applicable today. It’s even possible to directly relate some of the truths he spoke to the multiplatform transmedia cross media world of today. Here are five great quotes from the thinker and my take on their application today:

Life is pretty simple. You do some stuff. Most fails but some works. You do more of what works. If it works big, others copy it quickly. Then you do something else. And that’s the trick, the doing something else.*

Amen to that. There is no other way to succeed than to be prepared to fail and learn. The learning part, especially when it comes to something as volatile as the media industry, is crucial; what works and what doesn’t, and being able to identify why something works or doesn’t and how that applies on other projects. This is something that naturally becomes easier with experience… and again, you will not get that experience by anything else than, as Da Vinci put it, ”doing some stuff”.

I would also recommend people to not copy. Let yourself be inspired, without a doubt. Learn from what other people have done, of course. But be original, don’t copy outright, and you will learn so much more. Building on that…

Planning is great. Reading up on stuff and projects and case studies is important. Discussing, debating and defining is essential. But at the core of it all, it’s the ”doing” that gets us somewhere. I find myself frustrated when projects do not move ahead for one reason or another; not only because of the projects themselves, but because I don’t get to actually DO what I feel I need to be doing. This goes for most of us, I assume; I have, however, gone increasingly towards the decision to always have at least 2-3 smaller side projects running, without any strict deadlines, that I can apply my skills to when other, bigger projects are held up. And quite often, through work on these smaller projects, I gain knowledge or come up with ideas that can be directly translated into something that will be a gain for that bigger project. We must do.

It had long since come to my attention that people of accomplishment rarely sat back and let things happen to them. Instead, they went out and happened to things.

I love that sentiment. I want to be a person that goes out and happens to things; preferrably the media industry, the art of storytelling, an audience and so on. As another of my favorite sayings goes: ”It doesn’t matter if you’re on the right track; you’ll get run over if you just sit there”. I firmly believe that transmedia needs to be this as well; a movement that goes out and happens to things. It’s already getting there, of course. But from a transmedia POV it could be happening even more.

Simplicity is the ultimate sophistication.

As someone who has created a lot of content for publishing, radio, TV, online, cross media and transmedia, I can vouch for this. The hardest part, as I think you all know, is to keep it simple. Keep trying to simplify whatever you’re doing, over and over again; when you feel it’s too simple, it’s probably just about right. And whenever you feel like something will require that you spend more time explaining it than what it would take to just experience it, you should seriously consider to re-develop that part.

For once you have tasted flight you will walk the earth with your eyes turned towards the sky, for there you have been and there you will long to return.

For me, the moment happened some years ago. I was developing a kids show for the Finnish Broadcasting Company, developing physical games to be played on the show and synchronizing them to similar content online, knitting it all together through a narrative that took place on a gigantic Space Cruiser. We went to the studio to test it all with kids from the target audience, not really knowing what to expect. Watching the kids do it all, with an eagerness and an engagement that transcended anything I could have hoped for, was awe-inspiring.

For different reasons, the final product was limited in comparison with the blueprints we had drawn up, but that feeling – of integrating media, physical stuff, online interaction into something that made that Willful Suspension of Disbelief feel like a given – led me to the art of transmedia storytelling. I might have to do a lot of toiling down here on the ground, to cater for customers and get the job done. But my eyes are steadily turned skywards, towards a world where platforms have ceased to exist and all there is are the narrative and the story.

* Since I wrote this post a couple of months back, I’ve read more about the great Leonardo. I saw references to him being misqouted in several instances and started investigating; turns out that these quotes, the first two ones, are mis-attributed. In fact, the first one – about “doing stuff” – is from a post by Tom Peters from 1994. The second one is debated a bit about, but online it can be found in a written version of a sermon by Russell C. Taylor. The three others are based on a manuscript from 1888, a translation of Da Vinci’s scriptures.

TL:DR: some of these are in the end probably not Da Vinci’s quotes. On the other hand, they still inspire me, so I’ll keep them here with this as disclaimer.

6 thoughts on “Da Vinci on Transmedia”