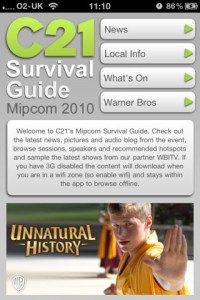 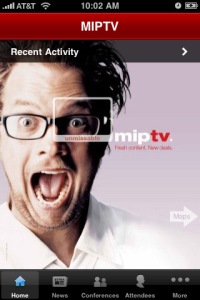 I was suitably impressed with the iPhone app launched for MIPTV this spring. Now we have two competing apps, the official MIPCOM app and a “survival gide to MIPCOM”, launched by C21 and Warner Bros. Below, a quick review of the two apps. Which one do you need? (Note: this is of the 30th of September, so updates are most certainly coming up in hte next few days):

It looks shiny and nice, good graphics and a good interface (although the woman who serves as wallpaper looks like she’s aghast that you’ve just showed her something very inappropriate). The options on the opening screen are easy to understand, the categories being Live, Conferences, Speakers, Attendees, Mailing list, My favorites, Videos and Photos/Maps.

The Live category naturally features nothing about MIPCOM yet, but offers instead stuff that was uploaded at MIPTV 2010. Good for a reminder on what went on then, but not much else. Conferences gives you a fairly good view of what’s happening during the different days, and lets you go through to the different seminars and comment, upload photos and notify that you’ll be attending. Nothing extra though – as a tip, perhaps if you notify that you are going to the Entertainement Master Class on Monday, you’ll have something waiting for you there as an “early bird present”? Doesn’t have to be much, a pen or whatever, but would be a nice touch.

Speakers gives you a iTunes/Mac-ish photo scroll which lets you browse the different speakers and read more about them, as well as comment. Again, it all looks good and moves slickly, but perhaps something a little bit extra could have been in the offering? Attendees lets you browse who’s coming to MIPCOM. There are quite a few people, so a search option for categories (buyer, for instance) might help? Also, it’s hella sluggish, so perhaps not putting all attendees in one big row is the best way? Clicking on a person puts you through to the Online Database (which then is a chapter all to itself)

Mailing list/websites is essentially links to updates from Reed MIDEM about the MIPs, nothing special as far as I could see. Videos are a bunch of best-of videos from MIPTV 2010, and one promo video for MIPCOM 2010. Photos/Maps is a clutter of, yeah, photos and maps. Although the maps aren’t that good resolution and are not really that useful.

All in all, the official app feels at the moment like a last-resort backup for when you can’t find your catalogue, or anyone to ask, or a MIPNews paper for that matter to check what happens next amongst the conferences. It simply does not feel as essential as the MIPTV app did this spring.

Well now, this is another creature. It’s a “survival guide”, implying that you’ll most likely die at the Palais if you do not have this app installed. (hint, you might still just survive without it).

The last category lets WB show you their shows, tell you their news and give you their contact info. All good, if you’re interested in what they have to offer, or want to get in touch with them. If not, just skip that particular button.

News is a C21 RSS Feed combined with (at the moment) a couple of pictures, one audio clip and a twitter feed for – I presume – the #MIPCOM hashtag. Nothing essential, nothing to write home about, still might give you some interesting stuff to read if you have a spare minute or two.

What’s On gives you the chance to sort all keynotes and seminars via date or via speaker, of which the speaker search feels like a good one.

But it’s the Local News category that you’ll be interested in, and not the Numbers subcategory with hotel hotlines etc. No, it’s the combination between a map of the Croisette and Cannes beachfront combined with a listing of all bars and venues in the area, with a short description of every venue. And all venues are pinned on the map. Mmm, here we go 🙂

The official app is the one you will download, not use, and then delete in November at some point. The C21/WB app is the one you’ll download, forget about because it really doesn’t help you in your daily business at MIP, but which you’ll pull out at 11.15pm on Monday night to check “goddam which bars are still open eh??”. You choose the ooze.

3 thoughts on “MIPCOM apps – a review”